My husband’s step-mother passed away in July. She had been battling terminal cancer for 7 years. She was able to see her grandchildren be born and live longer than most people with such invasive cancer. We knew it was coming and that it could be any day, but nothing prepares you for the call. My husband called me and immediately we started making plans to go to Ohio for the funeral.

It happened to be the weekend my husband was off work. We were planning on leaving Sunday and coming home Thursday, but by Friday, we had decided to leave late that night. We realized this would be a difficult thing for the kids so we thought we would leave early and make it a little bit of a vacation.

We made it to Chattanooga, Tennessee early Saturday morning and stopped at Ruby Falls. It was something we had noticed last time we came home from Ohio, but didn’t have the time to stop and check it out. But this time we were prepared to stop and spend some time taking the tour. Boy are we glad we did!

Ruby Falls is a waterfall located 1100 feet below the surface of a mountain. You are guided through the cavern for about half a mile to get to the waterfall. Then for about 6 minutes a light show plays over the fall lighting it up beautiful pink, red, purple and blue. It is an amazing site that I highly recommend.

After Ruby Falls, we continued on our way to Ohio. Sunday was a relaxing day. Monday was the funeral.

My husband had a lot of things to do to prepare and then had to be at the funeral home early for the visitation. The kids and I decided it would be best to come later and spend some time running errands and taking our first trip around town without a tour guide (aka the husband). I didn’t manage to get too lost thanks to Google Maps.

The funeral was the first time our kids have had to experience a death. It was hard to explain to them what they would be seeing as it was an open casket and grandma looks like she is sleeping. But they both handled it well. I think that part was harder for me. They were both really sad to have lost their grandma, but they know they will meet her again in Heaven some day.

Tuesday we decided to take a risk for me. On the drive up to Ohio, I sent an email to my biological father who I had only been emailing with for the last 2 years or so. Prior to that, I haven’t seen or heard from him in over 10 years at least. He had emailed me back and said he would love to see me and meet my family for the first time. So we made the 6 hour drive from Cincinnati to St. Louis…for lunch. (Yeah, a little crazy…my husband has told me this many times).

We arrived about an hour before we were due to have lunch so we could walk around the city. We visited the Gateway Arch and took some beautiful pictures. 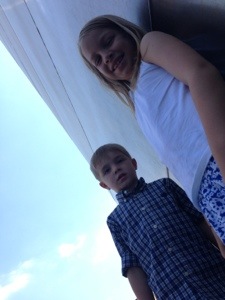 We then walked 5 or 6 blocks over to Busch Stadium where the Cardinals play.

Finally we walked to the restaurant to meet my father. I was insanely nervous. I wasn’t sure if I would know what he looked like or if I would be able to handle meeting him. It was a very intense time waiting for him to arrive. When he walked through the door, I recognized him from the picture he had sent me when we first started emailing. I gave him a hug and introduced him to my family.

We spent the next hour catching up and just getting to know each other. My husband’s helped carry the conversation when it started getting quiet. Apparently shyness is genetic! And after lunch we went for a small walk around the park in the middle of the city. He pointed out the courthouse where the Dred Scott case took place. It was interesting to learn some history on the city my father calls his home.

And then it was time to leave. We needed to get on the road back to Florida and he needed to get to work . It was this moment that we took our first picture together since I was a child. We took one with the kids too. I keep these pictures in my phone so I can look back on them often.

Although our reason for taking a family trip was sad and we will forever miss my mother-in-law, I feel very blessed we were able to meet my father and continue to build a relationship. I will forever be grateful for this trip and for my husband for making it possible to take a 6 hour detour for…lunch.